Look what we woke up to today! 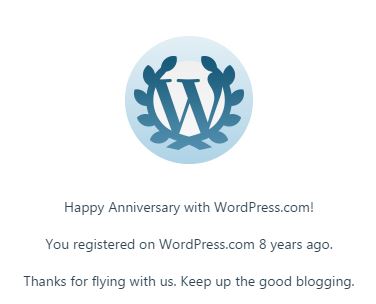 Eight years, really?  Boy, doesn’t time fly?  We are going to commemorate this milestone with a whole new look for the Self Publishing Advisor blog.  It’s now cleaner and faster/easier to navigate. We hope you like it.

And now for the news!

This week in the world of self-publishing:

In this July 28th press release as reposted on Broadway World, Outskirts Press makes known its latest crop of bestsellers, several of which you may already have heard–including, of course, actress Mirtha Michelle Castro Marmol’s Letters, To the Men I Have Loved.  Published just over two years ago in June of 2014, Letters continues to demonstrate its remarkable staying power while it holds on to spot number six.  (Her latest book, Elusive Loves, was published late last year.)  And in tenth place, Chidozie Osuwa’s What She Feels continues to make good on its international acclaim.  (Is it a coincidence, one might ask, that both of these regulars on the Top 10 list are books of poetry?  I don’t think so.  Whoever tells you poetry is dead–and there are plenty of people who do say this–clearly hasn’t looked at sales figures over the last year.)  The list includes several other books of interest (exactly eight, to be precise), several of them centering on the theme of faith, and several others of the memoir and nonfiction genres.  To read up on all ten books, check out the original press release here.

“The dismissal of self-published books in a grand sweeping statement is irresponsible of a modern newspaper editor,” writes Samita Sarkar in this July 28th Huffington Post article.  Her piece, while also a fine defense of self-publishing in general, serves as a highly specific takedown of one particular person: Globe and Mail Books Editor Mark Medley, who made it his mission to downplay the hard work of Canadian self-published author Douglas Gardham earlier in the month.  “It is fine not to consider most self-published books,” Sarkar continues, “but this shouldn’t be because they’re self-published, and if it is, at least have the good sense not to admit this to your audience.”  Sarkar goes on to explain the difference between self-publishing and vanity presses, giving eloquent pause to anyone who might have the audacity to judge or–worst of all–pity an author who chooses to publish and market without the backing of a traditional publishing company.  “By registering an imprint and truly self-publishing their work, self-published authors can compete with traditionally published authors for the attention of readers,” writes Sarkar: “The unethical vanity press ‘middle man’ should have no place in this industry.”  But she saves her final word for the unfolding story of Douglas Gardham, whose hard work is already being discovered–and will no doubt continue to be so.  For the rest of Sarkar’s essay, follow the link!

This is a week for lists, as John Maher’s July 28th post to Publishers Weekly online proves.  Not to be shown up by Outskirts Press, Publishers Weekly is also in the habit of releasing its lists regularly, and this week’s is a doozy.  Says Maher, “The tables were turned against the traditional publishers on the iBooks Bestseller list this past week, as five of the top ten titles on the list were self-published.”  The five titles in question include “top-slotted” Just Friends by Billy Taylor in first position and Helen Hardt’s self-published Obsession down at #4, with several volumes of Kendall Ryan’s self-published Hitched also making the list.  When you consider that Taylor and Hardt both beat blockbuster successes The Girl on the Train and J.K. Rowling’s screenplay for the newest addition to the Harry Potter canon–well, that speaks volumes about how far self-publishing has come in making its mark on book sales.  You can find Maher’s full list here.

ABOUT KELLY SCHUKNECHT: Kelly Schuknecht is the Executive Vice President of Outskirts Press. In addition to her contributions to the Outskirts Press blog at blog.outskirtspress.com, Kelly and a group of talented marketing experts offer book marketing services, support, and products to not only published Outskirts Press authors, but to all authors and professionals who are interested in marketing their books and/or careers. Learn more about Kelly on her blog, kellyschuknecht.com.