Welcome back to our Tuesday segment, where we’ll be revisiting some of our most popular posts from the last few years.  What’s stayed the same?  And what’s changed?  We’ll be updating you on the facts, and taking a new (and hopefully refreshing) angle on a few timeless classics of Self Publishing Advisor.

“Is my book too expensive?”

“Am I selling myself short?”

Traditionally-published authors usually don’t have any control over the price of their book. As a self-published author, though, how can you make sure you have priced your book appropriately? There is no hard and fast rule, unfortunately. However, here are a few things to consider while coming up with a pricing strategy for self-publishing a book:

DISCUSSION: How did you decide on a price for your book?

I absolutely love Elise’s post on ebook pricing, especially since most of the points hold steady in the face of a rapidly changing market.  There’s very little that’s the same in 2016 as it used to be in 2012 when it comes to the world of self-publishing in digital formats––except for this!  And while some figures may require updating––and Borders has gone altogether out of business––I cannot think of better advice than what Elise gave us in these five simple points.

One recent event has, of course, dramatically altered the parameters by which you should set your ebook’s price: Hachette won its suit against Amazon.  What does this mean?  Why should indie authors care about a battle between an online retailer and a traditional publishing company?  I can think of several reasons.

One: Amazon is far and away the largest online retailer of ebooks, outpacing Barnes & Noble by leaps and bounds and leaving Apple’s iBook store and the Google Play store to contend for the last percentages of the market with their book subscription services and bundles.

And two: Hachette’s win means that Amazon no longer gets to keep ebook prices artificially low––justifiably low, in Amazon’s opinion––as the prices of ebooks put out by the Big Five traditional publishing houses cannot be reduced by the third party online seller.  As a consequence, ebook prices have been soaring––as the Big Five set higher prices to rake in more profit, many self-publishing authors are following suit because of the luxury principle; they don’t want their books to be assumed inferior in quality just because they’re less expensive.

A lot of factors go into your price-setting decision.  Are you looking mostly for exposure?  If you are, then selling your book at a dramatically reduced price (say, a $0.99 deal) may well get your book in front of more pairs of eyes than if you price it higher (say, around $9.99).  A low price might also help lure in readers who are itching to try a new book but only have a little free cash to risk.  But a low price cuts into your royalties, and for Amazon especially the highest royalties (around 70%) come when you price your book around the $2.99 sweet spot.  You may lose a few risk-conscious readers, but you only need one reader to purchase your book to every two who turn away in order to break even in your royalties when you boost your price to $2.99.

Your book’s genre and length can also play a role.  Remember Elise’s fourth point, above?  If you’ve written a book that falls neatly to a particular genre (or perhaps, relates un-neatly to several) then you should take a long look at how similar novels of a similar length and style are being priced.  All books are wonderful things and no genre is inherently more “literary” than another, but a pragmatic author must recognize that human perception is flawed and nowhere near as egalitarian as we’d like.  This is to say, romances, Westerns, science fiction, and fantasy tend to be priced more cheaply than, say, a travelogue or political exposé.  You don’t want to price your book outside of your ideal reader’s expected range.

In a lot of ways, it’s easy to lose sight of your vision for your book when the price dominates conversation.  Here’s my advice for pricing an ebook in 2016: Do your research, consult an expert, and make the call.  Don’t spend too much time deliberating, or you’re missing out on the most important thing that you as an author can be doing: writing another book!  ♠

Two weeks ago, I launched this series by laying the groundwork for understanding what the FutureBook (and its parent organization, The Bookseller) is all about and, as a result, what the annual Digital Census seeks to measure and comment upon.  (In summary: it tracks emerging and outgoing matters of interest for authors and publishers and other trade experts invested in digital publishing, whether through traditional or indie, hybrid, and self-publishing platforms.)  I also took a quick peek at the FutureBook‘s first confirmed trend of 2015: the fact that mobile has overtaken both tablets and dedicated e-readers as the primary means for reading ebooks.  And last week, I applied a microscope to the FutureBook’s second confirmed trend of 2015: the fact that digital sales are still growing, but that growth is slowing. 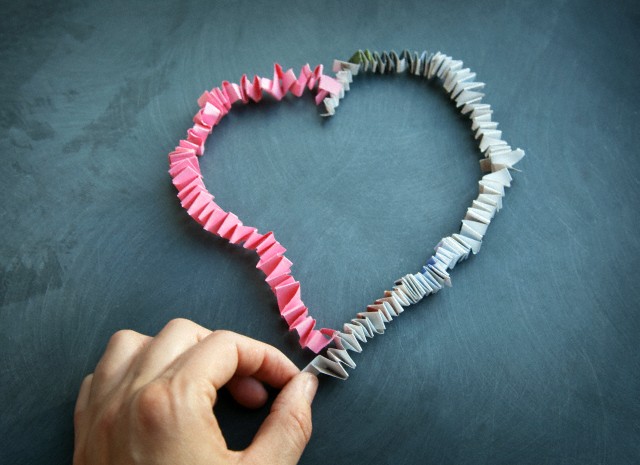 This week, I’m going to examine the FutureBook’s third confirmed trend for the year.  Straight from the horse’s mouth, so to speak: “Self-love levels recede as many indie authors report lower satisfaction levels.” The FutureBook publication, which you can read here, says: 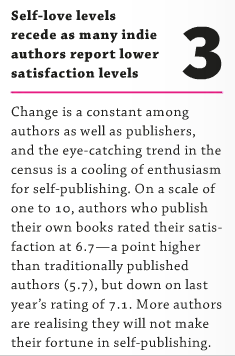 You can imagine how deeply sad I feel when I see a well-respected and industry-enriching publication commenting on authors tanking in the self-love department.  As it turns out, the data indexed by the Digital Census isn’t necessarily asking authors to psychoanalyze their performance and self-satisfaction, so “self-love” may be a bit strong of a term––but then again, maybe not.  Many authors do equate self-satisfaction (and their identity, really) with their performance in respect to sales figures.  And that’s a deeply problematic way to measure self-worth, as everyone is well aware … but sometimes we can’t help but believe it to be an accurate yardstick, especially when we’re spoon-fed a certain narrative by the mainstream media: the narrative in which success means J.K. Rowling, means Veronica Roth, means Tom Clancy and P.D. James and Agatha Christie, means George R.R. Martin, means blockbuster film adaptations and interviews with Ellen or Oprah or Jimmy Kimmel.

Maybe other self-publishing authors and bloggers might be content to state that this is wrong and it shouldn’t be the case, but I can’t just let it lie.  Where does the narrative of success originate?  And how can we alter the conversation to reflect a more holistic, life-affirming reality––the selfsame reality that indie, hybrid, and self-publishing authors of great quality and phenomenal worth experience on a day-to-day basis?

I think a lot of it comes down to the whole do as I say, not as I do syndrome that applies to many other grand social narratives in our modern world.  For example, we affirm again and again to our children that whatever path life takes them on, they have value––as plumbers as well as princesses, as garbage collectors and astronauts––but we flood their lives with films, television shows, and books that highlight the “exceptional” nature of the same “grand narratives” that the world will later try and tell them are impossible to actually attain, in adulthood.  (When was the last time we turned to a college student and said, “You can totally be a princess!” … and actually mean it?)

It’s the same with publishing, including self-publishing: we tell warn aspiring authors again and again that success doesn’t look like any one thing, and it certainly isn’t equatable with sales figures.  But at the same time, the narratives of “successful” authors that we learn about and spread through news articles and social media are almost always about authors who rake in the big bucks and attention from the Big Five publishing houses (after a successful “grassroots campaign,” of course), and about rags-to-riches stories like Andy Weir’s and Christopher Paolini’s.  And I’m here to say: it’s too little, and too late.  It’s simply not good enough to affirm our indie authors as individual successes with trite sayings and cold comfort.  By the time we need comforting, it’s too late.  We have to break the stereotypes and unravel the threadbare story before authors publish.

Otherwise, we’re always going to be playing catch-up and damage control.  I will always, always be on hand to affirm that you’re a success simply because you did the hard thing and you (self-) published your book, but I think we can do more to set you up for a healthy sense of your own value and worth and general excellence, and do it earlier and better.  Let’s start by teaching the next wave of future authors that numbers do not an identity make!

Thank you for reading!  If you have any questions, comments, suggestions, or contributions, please use the comment field below or drop us a line at selfpublishingadvice@gmail.com.  And remember to check back each Wednesday for your weekly dose of marketing musings from one indie, hybrid, and self-published author to another. ♠

I’ve heard many writers ask, “Are self-published authors actually successful?” My answer is always the same: Yes! But let me explain further…

According the dictionary, success is defined as the accomplishment of one’s goals. This means that the definition of success is personal and depends on each individual’s goals. While one author may define success has earning a certain income, another author may define success as something entirely different. Some common definitions of success among self-published authors include:

Self-published authors are capable of doing all of the things on that list.

How do you define success?

In order to be successful, you need to figure out how you define success. What do you want to accomplish by publishing your book? Are you looking to earn an income? Improve your professional career? Simply finish the manuscript you’ve been working on and see it in print? Share a story with your children?

Now, set your goals based on your definition of success. For instance, if earning an income is your ultimate goal, set goals to market and promote your book. Aside from writing and publishing a great book, you will need to focus on how you’re going to sell your book.

On weekend mornings, I enjoy nothing more than reading the paper to find out what has happened this week (now I primarily read the news online) in one place without searching many places. With many “tweeps” (Twitter slang for “people”) using paper.li to put together information, you can keep track of things pretty easily. What if you don’t have a Twitter account? What about the sources the things that weren’t mentioned?

Here we aim to feature things that are going on in self publishing so that you don’t have to find out on your own. Plus, we want to share other resource with you so that you can be well-advised on the publishing process.

So, sit back, relax, and enjoy this week’s digest.

Have you written something our readers can benefit from this week? Post a link in the comments.