When we read good reviews, we definitely like to share them. It gives the author a few (permanent) moments of fame and allows us to let the community know about a great book. Here’s this week’s book review, courtesy of BlogCritics.org: 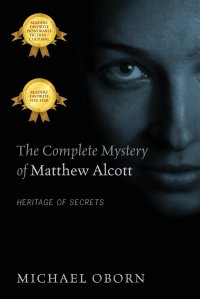 The Complete Mystery of Matthew Alcott

Matthew was fired from his job as church historian. His wife divorced him. At the funeral of his father, he realized it was his excommunication that killed him. Does Caitlynn have to die also, because Matthew was a naughty boy? Can he find her before it’s too late? They took everything from Matthew. All he had left was his rage.

I was interested in how a book written in the thriller genre could answer “Was Joseph Smith the Hugh Hefner of the early 1800s?” and was soon to find out.

The beginning of the plot finds Matthew Alcott in the desert, naked and beaten. He makes his way to a small New York town, Resurrection Corner, and settles in find solace in a 12-step meeting for alcoholics. Alcott writes a book, gleaned from information gathered while he was a historian for the Mormon Church, which exposes Joseph Smith and revelations that were hidden by the church. The hierarchy of the church finds out about the manuscript and uses unscrupulous ways to prevent its publication.

That is the premise and the mainstay of the plot, but there is another side to the story and that is the struggles of an alcoholic and how the disease influences life. There was a complete sub-culture that readers, especially men in recovery, would relate to and get pulled into the story.

Personally, I found the exposed information on the Mormon Church interesting. Being this is a fiction book, I’m not sure how much of the information is embellished, but I would assume the basis is true. The power of the church and those running it are viewed as being corrupt with political and cultural clout.

The beginning of the book was very difficult to read because it in written in staccato style. The overuse of fragmented sentences presented flow issues and got boring. I also found redundant and irrelevant parts of the book that could be left out. These alone were burdening. As well, there were a significant number of editing issues that a professional editor would catch and polish up. Because of these issues, it was hard for me to convince myself to continue reading, but after reading reviews of the book, I continued with the challenge.

The second half of the book became more urgent than the first half, and the writing style changed to give the plot more flow and begged interest to move forward. I enjoyed reading the second half because the writing was more grounded. In fact, a few chapters did end up being page-turners, but the whole book fell short of the thriller genre.

I believe Michael Oborn has a gift of writing and could have his work developed into thrillers worth mentioning. His dedication to research the topic is noted and his knowledge of alcohol dependency and addiction certainly comes through in his writing. Although fiction, I do encourage readers interested in some aspects of the Mormon Church to check out The Complete Mystery of Matthew Alcott: Heritage of Secrets.  I think you will find it fascinating.

[ reviewed by Cristina Lanzi of BlogCritics.org ]

Here’s what some other reviewers are saying:

This somewhat fact-based, action packed fiction, is suitable for any ‘thriller’ reader – and you do not have to be Mormon or ex-Mormon to understand or enjoy it. Other reviews have already explained the storyline, and I don’t like to write ‘spoilers’, so I will in the main concentrate instead on the actual ‘read’.

One reviewer commented that they did not like the clipped sentence style but I found it dramatic and compelling. One or two other authors are renowned for it but it must be difficult to make it work as the style is rare. Mike Oborn has no such problem and I found it refreshing, quite appropriate for the story, and absolutely delightful to read. For me it added a quality to the work which is somewhat unique and I found it very enjoyable.

The book contains a book within a book, a story within a story, as our hero tries to publish a book which his Church would rather did not see the light of day. Another review describes the work as being similar to ‘Angels and Demons’; something I very much doubted – until I read it. Turns out that it is that good and it would make a very powerful movie. I simply could not put it down – all the time captured by where we were and wondering what happens next – just the way a good thriller should be.

I know the author suffered at the hands of the Mormon Church and left the fold several decades ago and it has taken this long for him to find a way of putting the past behind him – he finally found it in the form of writing. This I can thoroughly empathise with as I am a fellow ex-Mormon. I resigned membership and wrote my own way (non-fiction) through the trauma that follows such action, with the loss of friends and family who reject you as an apostate. Unconditional love is preached, but not practiced with someone who discovers that Mormonism is a provably hoax religion in which the conspiracy to deceive modern day members and investigators is alive and well. Only those who have experienced discovery of the truth and subsequent rejection could ever empathise with what Mike Oborn has been through in real life.

The main storyline is current, but to clarify and update background as we go along, the author constantly takes us momentarily back in time to several points, from the early 1800s and Joseph Smith’s depravity, to Matt’s (our lead character’s) earlier life and to what was happening a few years previously, to him and also to other characters in the book. This again is criticised in another review, but I thought that was harsh as it is not an unusual style of writing and I was very happy with the way this not only helps the reader understand appropriate background right at the point where such understanding is required, but I was also impressed by the way the author cleverly integrated such departure each time in a succinct and meaningful way – always tying in such links clearly and professionally, and quickly – back to the present.

I for one was never confused, never lost – and always on the edge of my seat with anticipation. It was a very satisfying way of bringing essential background into the story. I didn’t have to try to remember anything important for later in the book – it was brought in at exactly the right point in a ‘short and sweet’ manner. The fact that there is indeed quite a lot of such departure was clearly a deliberate style adopted by the author in order to enable the reader to understand everything in context and it worked very well; it enhanced and explained – but never detracted. All the threads were carefully and expertly brought together in a very satisfying manner.

In short, I cannot say enough about this work. Whilst writing it was an outlet for the author’s grief at the loss of so much – the outcome, regardless of what is ultimately true and what is fiction – is a masterpiece of writing and will be enjoyed by anyone who loves a good thriller. The Mormon aspect in this work detracts no more than the Catholic aspect in Angels and Demons – it is a natural integral part of the plot which is as easy to understand for someone who has no idea what the Mormon Church believes as for someone who does. All I can say in conclusion is – just get the book and enjoy the ride – you won’t be disappointed.

A classic novel starts with a crisis. As this book begins, Mathew Alcott has been divorced, fired, robbed, drugged and left naked in the Nevada desert. Powerful forces want him silenced, but have stopped short of killing him. Having already fled his native Utah and cut ties with his family, Mathew resolves to change his identity and disappear altogether.

He sets off on a drunken odyssey across the country. Arriving at random in New York State, Matthew goes to ground in a small town called Resurrection Corner. There he finds rest, companionship and a measure of peace. I enjoyed how Oborn built up slowly the relationship between Matthew and his new lover Cate. She is intrigued but disgusted by him at first, a drunk trying not-too-successfully to sober up. The description of their first night together is original and beautiful. But Matthew has brought with him burdens that he cannot easily put down.

A former newspaper journalist, he is determined to write a book examining critically the foundations of the Mormon Church. Matthew sees something of himself in Joseph Smith, the Church’s charismatic founder. And Matthew is determined to bring to light discoveries he made while working in the Church archives. The novel alternates between vignettes of Smith’s life and Matthew’s.

I cannot vouch for the accuracy of Oborn’s portrayal of Mormonism in general or Smith in particular. Suffice it to say that the Church and its members portray the rich, powerful and morally challenged opposition, a role played in other novels by capitalists or politicians depending on the author’s taste. We are meant to despise the bad guys, so they are made loathsome.

As a Chemical Dependency Professional, Oborn writes with passion and compassion about Matthew’s struggles with alcoholism. Other characters in the story -fellow addicts, counselors and caregivers – share this theme. The novel’s climax and conclusion feature an ensemble of unlikely heroes.

Like the Da Vinci Code, Oborn’s novel is at one level a long-running battle between Mathew Alcott and a secret society allied with the church. At another level it explores men’s use of religion to subjugate and control women. One may read it for entertainment, or to ponder deeper questions not limited to fiction.