When we read good reviews, we definitely like to share them. It gives the author a few (permanent) moments of fame and allows us to let the community know about a great book. Here’s this week’s book review by Midwest Book Review: 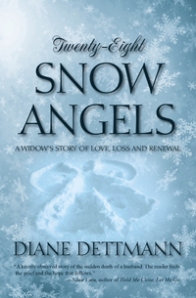 Author Diane Dettmann was still hopelessly in love with her husband of twenty-eight years when he died suddenly at age 54. The grief and pain one feels is no less when the death of a spouse is anticipated, but as Diane Dettmann discovers, a sudden death is more difficult at the outset because of the shock of the suddenness. There is no time to think, no time to plan, no time to brace one’s self. For Dettmann, the experience was even more difficult because she is an extreme griever. According to Therese Rando, Ph.D, “If you are such a griever, you probably are suffering from extreme feelings of bewilderment, anxiety, self-reproach, and depression, and you may be unable to continue normal life.”  It was just this state in which Diane Dettmann found herself.

I have always possessed a strong ability to cope with adversity, but the intensity of emotions and the state of mind about which Dettmann writes stunned and puzzled me. As I accompanied her on her descent into the depths of her despair, I was stunned and confused by her debilitating feelings and thoughts. Her anguish opened my eyes to the power that the sudden death of a loved one can have over our abilities to cope.

The author’s stream of consciousness writing style and the intensity of her words and feelings are so genuine that I could not help wonder if Dettmann would ever fully recover from the severe assault to her emotions caused by her loss. After what seemed like an ample amount of time had passed, Dettmann made the decision to sell her husband’s piano. She made the arrangements, but as she watched out the window, seeing the piano moving truck pulling away, she vividly recalls: “What have I done? I screamed as I looked at the huge void along the living room wall. I was not sure which was bigger, the empty space on the wall or the hole in my heart. I cried, screamed and paced the floor. Why did I let this piano go? I ran to the kitchen and grabbed the portable phone… ‘Manny’s Piano Movers.’ I sobbed into the phone, ‘Two of your guys picked up my piano a few minutes ago. It was my husband’s. He died. I need it back.'”

None of the conventional wisdom and counsel seemed to help Diane Dettmann much. But ever so slowly, after what seems like an agonizingly long period of time, her state of mind begins to ascend from the depths of despair to which she had sunk. And I realized that “Twenty-Eight Snow Angels,” despite Dettmann’s traumatic, life-changing journey, is really a story of patience and hope. It is a story that will inspire others, whether they have had a sudden death experience or not, to live each day to the fullest.

Welcome to this week’s edition of the Weekly Wednesday Podcast!

The moral of the story is: a penny spent is two pennies earned when you’re self publishing your book.

Like Loading...
Today’s topic is: Book Video Marketing Essentials.
A couple of weeks ago, we talked about how to use book video marketing as part of your book promotion strategy. Today, I’m covering what you need in your video a bit more in-depth. You need all of the following:
Also, the winner for our “Boost Our Blog Facebook Contest” was chosen. Here’s more about the winning author and her book:

– How do you research keywords?

– How do you include keywords in your webpage, website, or product decription?

– Asking for the sale.

Does your sales copy ask for the sale?

Here is an example of a book trailer:

Here is an example of the book teaser you can win by entering our Facebook contest:

DISCUSSION: What would you like us to discuss on next week’s podcast?