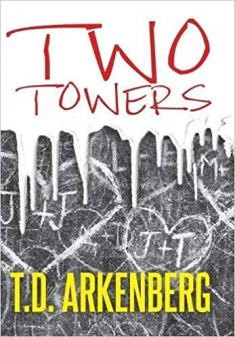 Sometimes, life pushes you to the brink. In his poignant memoir, Two Towers, T.D. Arkenberg navigates readers through a personal perfect storm. A resurgence of his father’s long-dormant cancer and chaos at his job in the aftermath of the September 11 terrorist attacks serve as the backdrop for a private struggle with a secret hidden for thirty-seven years. The story opens on Christmas Eve, 2001. Alone, he stands in his empty childhood home. Two months earlier, his father succumbed to cancer after a lengthy struggle. Five weeks after that painful loss, his mother’s unexpected death shattered his world. The double-barreled blast toppled his towers of strength and unconditional love at a time he was barely treading water. Only weeks before his parents’ deaths, his professional life descended into turmoil. Nineteen hijackers commandeered four commercial jets, unleashing unspeakable terror on US soil. Two towers collapsed into piles of twisted steel, a dusty grave for thousands of innocent souls. Two of the planes belonged to his employer. Eighteen colleagues were killed and thousands of others were soon without jobs. His leadership would never be more severely tested. Friends don’t know how he survives. Neither does he, especially with the added burden of a dark secret. As his world starts to crumble, fate offers a lifeline. Jim, a facilitator of a men’s coming-out group guides him through the process of accepting his sexuality. With towers collapsing around him, Jim might be able to save him from becoming another casualty. Two Towers stands as testament to duty and the power of love.

Final Descent may have been T.D. Arkenberg’s debut novel but Two Towers is a deeply connected return to this crushing accuracy and devotion as an airline employee. This is his first memoir and it is a love letter.

Arkenberg has inherited a work ethic from another generation. Throughout the narrative, which details the trials of the late 90’s into early 2000’s, even into the Crisis Center in Chicago O’Hare airport on September 11th, 2001, his dedication to United Airlines and his fellow employees is clear. He recalls how the airline grounded flights just before the devastating moment they discovered two of the hijacked planes were their own and the profound grief that caused: “Our airplanes were used as missiles. Our passengers and employees were murdered.” The depth of identity with his position reflects the very deep devotion to his company and the connection to his sense of self.

The story is also a love letter to his parents’ fortitude and endurance. How they shaped him cultivated respect and crafted an iron clad work ethic without ever knowing their son’s deepest sense of self and secret. Tender vignettes reveal his devotion to the aging couple, culminating in his father’s return to Montgomery Ward as they begin to liquidate locations.  Arkenberg demonstrates an acute sensitivity to the inner world of his family. He offers to take his father back to the closing location musing that “perhaps Dad’s fond memories of Ward outweighed the hurt.”

As a devoted son, he goes beyond the physical expectations of helping with snow shoveling and heavy lifting but also cares for their mental and emotional well-being. Arkenberg’s own capacity as caretaker is a gentle mirror of his steadfast mother as she remains a faithful caretaker during her husband’s life and lengthy fight with cancer.

Endurance is a running theme throughout Two Towers. As his career shifts, seemingly every few months, and he climbs ever higher on the precarious ladder of airline management during a most unsteady time, and as his father lapses into weakness and his mother finds less time to be herself as they pass slowly–or suddenly–into the grave, Arkenberg has committed to himself to come out of the closet and to live a full life without secrets. Again and again, he must reveal himself while learning to navigate the world not as the perfect son or model employee but as Todd Arkenberg, a gay man who loves his partner, Jim. Though he may be considered middle aged, his youthful fear and innocence in to the foray of that new existence heighten the tale.

Hundreds of stories about the events of 9/11 have surfaced but few invite us into the Crisis Center for United Airlines in Chicago as the events unfold. Countless memoirs may have shared the stories of caring sons but few offer the humanity of their own internal struggles beyond that role. More and more stories of ‘coming out’ are reaching the light, inspiring those who feel trapped, and Arkenberg’s tale joins in the voices of attaining strength through vulnerability.

Two Towers is not as fanciful or imaginative as his two Faulkner-Wisdom nominated novels, Jell-O and Jackie–O and None Shall Sleep, yet Arkenberg fans will still see the depth and introspection present in his earlier work. The earnest telling of his coming-of-middle-age and his slowly strengthening sense of self among the rubble of his childhood and first career in the airlines is a moving exploration of what pieces we use to put ourselves together. It is a tumultuous expression of how outrageous events can rock us out of the shell of our status quo. Arkenberg asks a number of introspective questions throughout the book and while not all of them get an answer, it makes for a thoughtful and emotional read.

An in-depth accounting of the life of a normal American, a joy to discover.

I have read all of T.D. Arkenberg’s books and each is unique and interesting. They are as different as the stories they depict, and each is it’s own unique journey. This book however was a journey of my own life in parts as well, since I had lived through a portion of this same story, as have all Americans, who were living on September 11, 2001. My own path and job responsibilities of that tumultuous time relived in this reading. I had other moments of empathy having lost both of my parents and becoming an ‘orphan’ as well. It means, in my case, I am forever a parent but never again a child. This author is gifted in being able to bring to words the emotions and personal details of his life in a way that can truly express what I and others have felt during the similar challenges faced in one’s lifetime. The best compliment I can give a book is to say that I couldn’t put it down and that I’d recommend it to others. Both are true. Go read it for yourself. Now.

– reviewed on Amazon by Valerie Driskill

This book eloquently and accurately captures the events at United during this time period, from balls supporting our communities to bankruptcy. Todd shares the challenges of caring for aging parents, corporate decisions and coming out in a society that did not fully support gay lifestyle. In my opinion this book accurately captures the outstanding individual that Todd is corporately, personally and creatively. Can’t wait for more!

– reviewed on Amazon by Andra