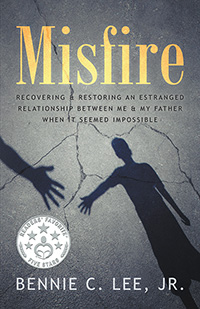 Misfire: Recovering & Restoring an Estranged Relationship between Me & My Father When It Seemed Impossible

While speaking at a summit on the campus of Georgetown University, President Barack Obama mentioned a conversation he had with a young man who asked the question, “How did you get over being mad with your dad, because I’ve got a father that beat my mom, and has left the state. I’ve never seen him because he’s trying to avoid eighty-three thousand dollars in child support payments. I want to love my dad, but I don’t know how to do that.” Many young men and women are faced with this painful quandary when dealing with an absentee father. Misfire: Recovering & Restoring an Estranged Relationship between Me & My Father When It Seemed Impossible addresses this question head on. Bennie C. Lee Jr.’s story details how an explosive relationship between his mother and father led to an estranged relationship between he and his father. For 14 years Bennie did not have much of a relationship with his father, and it seemed as if that was how the story was going to end; spending the rest of his life without his dad. To the contrary, they ended up sharing one of the greatest relationships a son could enjoy with his dad. In this book, Bennie shares six powerful, scripture-based steps on restoring an estranged relationship with one’s father.

Misfire by Bennie C. Lee Jr. is a story of one man’s journey through life and the difficulties of having to deal with an absent father, the effect it had on his impressionable young mind, and the steps he took to overcome his adversities. The author delivered his message of absenteeism among fathers as a perpetuating social issue of epidemic proportions, while using his six valuable steps to reconnect and/or establish a lasting relationship with the absent parent. Although the author states that his father was not always a part of his life, for 52 years they existed as father and son; it’s a very long time to have a relationship with his father compared to young men and/or women who never knew their parent at all.

While reading Misfire by Bennie C. Lee Jr., I found his storytelling style very refreshing and down to earth. It was like revisiting the ’60s, ’70s, and ’80s through the eyes of his young character – “Rabbit” – as he matured into a grown man, with detailed descriptions of the style of clothes and the music popular in those days. The scene that brought tears to my eyes was when Rabbit was running around to the various clubs to find his father, not knowing the truth about the events surrounding that near fatal shooting until much later in life. The author even describes in much detail the steps necessary to sharing your story and the impact the absent parent had on your life, and allowing him or her to speak without judgment. I enjoyed reading this well-written book, one that touched my heart and soul. This book would make a great movie.

The bright, almost blinding, florescent light of our cramped kitchen shown in my wide four-year-old eyes. The yells of my father toward my mother and her lover ring in my ears still forty-two years later. The silhouette of my father, standing in our front door cursing us as my mother knelt to comfort her sobbing son, are seared into my memory. This is my story and that of many others.

The power of Mr. Lee’s message in relating his life is to allow the many others like him, to safely relive the trauma caused by their absentee father, through the eyes of another who has successfully navigated to a place of peace. Peace not just for himself, not just for he and his family, but for himself, family, and for the greater good of us all.

He does this in three parts: firstly by relating a powerful autobiography which poignantly illustrates the key issues, pitfalls, blind spots, misdirections that torment and entangle many people who have experienced an absentee father, and reveals how beneficial and healing it is to repair the relationship; secondly he reveals how this trauma can manifest itself in our personally destructive behavior and how reconnecting with one’s absentee father can have a profound healing influence for ourselves, family, and the community; and finally he correctly instructs those who are suffering to seek expert help. Like the blind leading the blind, we often do not realize how our own filters impact our perceptions then actions.

– reviewed on Amazon by Dicken Greene

Mr. Lee is able to tell his intricate tale of seemingly personal and family bliss wrenched into turmoil, and its resulting wake of devastation and desperation, in a concise, riveting, and easily read format. Before long, we are drawn in and identify with his experience, because not one of us is, have been, or will be without abandonment in some fashion. His candid, raw, pathos-filled, no-holds-barred reflections of personalities, events, and their effects upon his life and others’ are discussed without varnish or candy coat. This is a true love story that ends well. Take his recommendations for healing seriously, for he has traveled the cruel highway of abandonment and arrived scarred, but strong and victorious.

– reviewed on Amazon by C.R. Evans