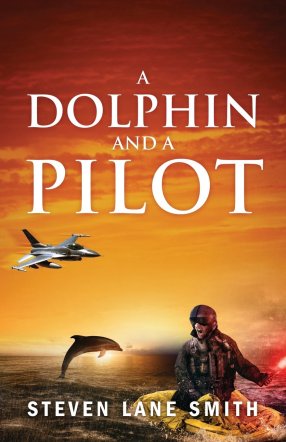 A Dolphin and a Pilot

At critical moments in the lives of two of the world’s premier acrobats, each has to decide the other’s fate. Time will tell whether the risk is worth the reward. Flash is a Pacific bottlenose dolphin with a passion for acrobatics. Aspiring to be a world-wide sensation, he undertakes a 15,000-mile journey to reach the venue of his dreams – Aqua World. Captain Jon “Skip” Roper is an Air Force fighter pilot flying in a formation of four F-16s from Korea to Peru. At the pinnacle of his career, Skip is the master of his universe until a cockpit warning light illuminates in the middle of the Pacific Ocean. The drama that unfolds propels the two proud acrobats onto intersecting courses. Each is confronted with a vital decision that will alter the life of the other. The consequences of their decisions signify triumph for the interdependence of Earth’s species.

A whimsical yet compelling tale in which the fates of an unlikely duo collide, “A Dolphin and a Pilot” by Steven Lane Smith shows how two simple acts of compassion and kindness form an irrevocable bond of trust and friendship.

Flash is a young Pacific Bottlenose dolphin with a dream. The best acrobat in his pod, Flash craves the applause and admiration of humans and hopes to be world famous one day as an entertainer for Aqua World.  Against the advice of family and friends, Flash leaves his pod on a 15,000 mile quest to fulfill his dream. Flash bravely navigates through many of the perils in the ocean, but a treacherous encounter with an unruly group of humans leaves him wounded and vulnerable.  Will he make it to Aqua World or should he return to his pod?

Jon “Skip” Roper is a fighter pilot based at Osan Air Base in Korea. With just hours left of a week-long simulated air combat mission, the control panel in his F16 illuminate. As the systems begin to fail, Skip realizes his only chance for survival is to eject. Injuring his right hand in the process, Skip makes it to his survival raft, but his troubles aren’t over yet. With only a protein bar for sustenance and one container of drinkable water, he is exposed in his tiny one-man raft, in a sea full of danger and no land in sight.

Without giving too much away, Flash and Skip come together briefly at a couple of critical points in the story to teach lessons in mercy and relationships, and restore hope and faith in goodness and humanity.  A tall order for satirical fiction!

I’ve read a few novels by Steven Lane Smith and love his story-telling technique. He has a clear, distinctive voice and his clever wit shines throughout the story. His humor is often so subtle that many times as I was reading one page something he said on an earlier page suddenly clicked.  Skip Roper – ha! Most of the time however, the writing is just flat out hilarious, especially the dolphins’ take on things. For example on page 37, “I know what my life’s work is going to be!  I’m going to entertain humans in captivity!”  Flash’s obsession and obvious ignorance of what being in captivity actually means provides for some serious laugh-out-loud moments.

Not limited to humor, Smith can also write some agonizing drama. In this particular story the author’s background as a former fighter pilot provides a completely authentic experience.  One can actually feel the exhausting, painful ordeal Skip Roper goes through when he becomes stranded on a tiny survival raft through the author’s expert portrayal of the events.

Fans of satire, action and adventure, and general “feel good” stories will enjoy “A Dolphin and a Pilot” by Steven Lane Smith.  It is such a fun book to read and a thoroughly enjoyable experience that I highly recommend.

Did you ever read the book, WATERSHIP DOWNS? It is a phenomenal story about rabbits who displayed human characteristics. As I was totally enthralled reading A DOLPHIN and a PILOT, the similarities were huge. This is a book everyone should read; light, humorous, didactic, it kept me fully engaged. This is an extraordinary book whose genius author allowed we readers to glance into another world where humans and mammals/animals portray our “oneness.”

– reviewed on Amazon by E$rnie Carwile

This book is one of the best “Make you feel good” book that I have ever read. The subtle humor and the “dolphinizing” of human sayings and social issues made me laugh out loud numerous times. Bravo Zulu, Mr. Smith. I have recommended this book to many of my friends and, the ones who have read the book, made similar comments. This book will make a great Christmas present for all ages and genders.

– reviewed on Amazon by John Fenton

Steven Lane Smith is a brilliant fiction writer. His grasp of the human condition coupled with his simple, profound observations have made him among my very favorites. A Dolphin and a Pilot is another thoroughly enjoyable SLS offering that rises to the very high standard this gifted author has set. I highly recommend this wonderful book.

Smith is a master story teller. In A Dolphin and a Pilot he weaves a compelling tale of a young dolphin’s love of acrobatics – something difficult and beautiful. The dolphin’s problem is that in his immaturity, he has confused the rush of adulation with the deeper satisfaction of doing a difficult thing well. The addiction to public approval is so strong that he is willing to give up everything important in life to achieve it.

We meet fighter pilot “Skip” Roper is he is preparing to depart on what he believes will be a routine flight. Smith – a veteran fighter pilot – speaks with authority born of personal experience as he puts us in the cockpit of an F-16 with Roper. Flying a jet fighter aircraft for a living is something precious few have done. Roper, a member of this elite club, has confused what he does with who he is.

When our two friends meet, Smith weaves gentle reminders about uncomplicated but vital life lessons into a compelling, funny and deeply satisfying story. I found it impossible to avoid getting lost in this wonderful tale and it has remained with me long after I finished the final page.

I love this book. A Dolphin and a Pilot. Don’t miss it and let’s hope there are more coming from this talented author.

– reviewed on Amazon by T.W. Price

THE GANG CALLED Los Bandidos was both an irritant and a source of amusement to dolphins in the pod. The most reactionary members of the pod wanted to expel the motley crew of ruffians, but Churchill, able to recall his own wayward youth, warned his fellow Balboans that what might evolve to take the place of Los Bandidos might be worse.

Every pod in the Pacific had a similar band of brigands made up of adolescent male dolphins aged between three and five years. Each of Los Bandidos’ goof-offs and smart-alecks was too young to start a family but too old to be satisfied hanging around with his parents. Gang members were variously reckless, rebellious, sarcastic, rude, half-witted, idle, cliquish, selfish, mischievous, proud to be accepted into the gang, and merciless toward adolescent dolphins denied acceptance.

Churchill once summed up Los Bandidos this way: “Never have so many done so little for so few.”

Adora frowned on Flash’s involvement with Los Bandidos, but Finbar, who wasn’t eager to hold up his own youth as a model of propriety, was more resigned to it, saying, “Humpf!  Hooligans will be hooligans.”

Flash was readily inducted into Los Bandidos because of his good looks and his athleticism. The gang of louts even waived giving Flash a nickname, because his name was so cool just the way it was. Nicknaming was an important ritual in Los Bandidos culture intended to promote comradeship among the unruly fraternity of delinquents. It normally was a primary order of business during induction of a new member. For Clyde and Cecil and other less-fortunately named gang members, a name change was thought to be vital. Satire and sarcasm were common.

“Slim” was as fat as a pig because there wasn’t a time of day when he didn’t have a mackerel stuffed in his mouth.

“Frank” was the truncated gang name for Frankenstein, possibly the ugliest dolphin in the Pacific. Beside Frank, a Morey eel looked gorgeous.

“Gash” got his gang name when the propeller of a ski boat near La Jolla put a notch in his dorsal fin.

“Stud” was the name claimed by the biggest and most cynical dolphin in Los Bandidos.

“Einstein” was as dumb as piece of coral.

“Lefty” listed to port when swimming because his left flipper had atrophied from being stuck in a Mason jar O-ring at an early age. The snout of a dolphin was too blunt an instrument to pry off the ring, and Lefty’s parents were too proud to ask a marlin or a sword fish for help.

The most morose Bandido of all was called “Happy”.

As for “Punk,” enough said.

One thought on “Tuesday Book Review: “A Dolphin and a Pilot””