When we read good reviews, we definitely like to share them. It gives the author a few (permanent) moments of fame and allows us to let the community know about a great book. Here’s this week’s book review, courtesy of Charles Ashbacher Reviews: 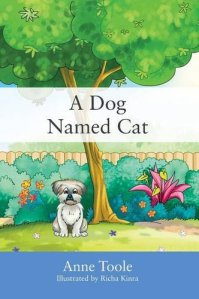 Five out of five stars

It began as a joke, when a family went to a shelter in order to acquire a dog, the boy Tad picked out one with a brown, gray and white coat. When the time came for a name to be given, the baby pointed at the dog and said, “Cat.” The human members of the family though this was cute and non-traditional and decided to use that name.

However, over time when Cat was repeatedly told by other animals that he was not a cat, he began feeling bad. Cat tried barking a lot and other things in an attempt to show his displeasure, but nothing ever worked. Finally, when he steps in and “saves” Tad from a snake, Tad refers to Cat as “Lucky.” The new name sticks and the source of unhappiness in the life of the family dog is removed.

The structure of the story is in the form of two or four line sections where the alternate lines rhyme and the level of difficulty is approximately that of the second grade. The illustrations are very well-colored with a great deal of detail. Light shadows and even reflections off the tiled floor can be seen.

This is a book that children will find fun to read, for they like stories that are formed from simple rhymes as well as about animals that communicate. I would have read this book to my daughter when she was young and she would have loved it.

Here’s what other reviewers are saying:

This is an excellent story with rhyming verses about a dog named Cat. Upon meeting several creatures (mouse, bird, goldfish), the little dog is confused as to why he was named Cat since he does not look like a cat or acts like a cat. He takes steps to try to get his name changed that prove unsuccessful. He is finally successful in getting his name changed following an event involving a snake.

The illustrations are very good and the rhyming is excellent. Children from kindergarten to 2nd grade would find this book enjoyable.

I also enjoyed Ms. Toole’s other books that include rhyming verses and that also teach valuable lessons (Mean Mike, The Bird That Didn’t Want to be a Bird, and The Frog that Lost His Croak.)

In A Dog Named Cat, a little dog with an unfortunate name learns that 1) he is not a cat, and 2) some cats are not very nice, so why would he want to be named after one? Cat is determined to change his name. But how?

From other animals he had found

That cats weren’t very nice to be around.

Another name he wished he had,

Because being named Cat made him mad!

What did the little dog do

To change his name to something new?

Author Anne Toole was a first grade teacher and ESOL instructor before she began writing children’s books, and understands the issues children deal with on a daily basis—making friends, what makes them special, fitting in, etc.

“When I became a teacher, I used nursery rhymes and simple poems to enhance the regular Language Arts curriculum. As a child, I loved to listen to nursery rhymes, and so most of my stories are written in verse.”