When we read good reviews, we definitely like to share them. It gives the author a few (permanent) moments of fame and allows us to let the community know about a great book. Here’s this week’s book review, courtesy of Books, Reviews, Etc: 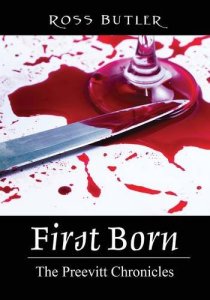 She thought that life in a new town would be boring; boy, was she wrong! Fifteen-year-old Ruth Daniels has never had a lucky break due to being a lifelong orphan living in Michigan, but she ends ups going from a orphan to a family girl after she gets adopted by a widowed businessman and moves to New Jersey to live with him and his family, including a stereotypical teenage brother, a snobby sister and two twins. Yep, that’s all there is to it. Soon after her arrival, she starts school and almost instantly ends up with two new friends: Rachel Evans, a redheaded senior, and Justin Reynolds, a quiet, lonely and withdrawn sophomore. The latter of whom Rachel seems to hate with a vengeance. As Ruth and Justin’s friendship begin to evolve, Rachel starts to stalk and attack them almost constantly, and Justin knows why: He’s a human/animal hybrid called a Preevitt, he and Rachel are longtime mortal enemies, and Ruth is now part of their longtime war that also includes Justin’s twin siblings, Jaz and Wheeler.

Ruth Daniels from Michigan evolves from an orphan to an adopted daughter of a widowed Businessman. Him and his family are in New Jersey.  Ruth moves to New Jersey with her new family. What a family.  We have twins,  a typical brother who is a teenager and a real uppity sister.  That’s the family.  Quite a change for Ruth.  She has always been an orphan.  After she moves to New Jersey she starts high school and immediately makes two new friends. Justin Reynolds is an introvert, and a sophomore.  Ruth then makes friends with a senior, redheaded Rachel Evans.   Rachel isn’t happy with the friendship that Ruth and Justin are developing.  Right off she detests Justin. Rachel goes on the attack, especially against Justin.  What is it about Justin?  Why are Rachel and Justin at odds with each other?  Is there a secret between them? Will this war between Justin and Rachel affect Ruth? The author takes you into another world.  One minute the world is as you live in.  The next, you’re facing another world. The book is fast paced as the author takes you into some well developed characters’ lives.  As you turn the pages, you’re not quite sure what you will find next.  This isn’t your typical high school friendship. This isn’t a jealousy issue.  This is way more.  The author starts out with a quiet story about Ruth and it slowly gains momentum until you’re in another world.  What does Preevitt mean?  Read and find out. Good book for teens and adults.

I would give this book 4 STARS.

Here’s what other reviewers are saying:

In this Urban Fantasy, we read the story from the perspective of a moody, disgruntled and contrary fifteen year old. She was orphaned at an early age, and when the orphanages closed down, she lived with her elderly social worker. She is adopted by a family in New Jersey, far away from Michigan. She doesn’t want to go, but has no choice. Once she is there and meets her family, she settles down slightly. Starting a new school, she meets new friends and starts her new life.

With a very fast-pace and a severe case of insta-love, this book tells the story of Preevits and Mugglers. Now Preevits may sound bad, but they have nothing on the Mugglers. And then, of course, you have bad Preevits thrown into the mix too.

Finishing on a high, with a possible link to a further book, this is a book for readers of YOUNG adult, with a paranormal twist.

And last but not least, an excerpt from the author’s Smashwords interview:

What is the greatest joy of writing for you?
The greatest joy of writing for me is putting down what I want to see on paper and throw it to the world for all to see. It’s basically me being myself and not worrying about being called for it. I can as funny, biting and sarcastic as I want to be and no one can take that from me. That’s one of the greatest joys of being a writer.
What are you working on next?
My next book is now being written. It’s A Satirical Western called “How The West went South”. It’s about an 18-year old guy who, after saving the life of the U.S. Senator is rewarded with a job as a U.S. Marshall and the hijinks that ensure afterwards. It’s already in the works and I’ll release more info when I’m ready to.
Who are your favorite authors?
Eoin Colfer, (The Artemis Fowl Series, “The Wish List” and “The Supernaturalist”) Rick Riordan, (Percy Jackson and the Olympians) Cassandra Clare, (The Shadowhunter Chronicles) and James Patterson, (The Maximum Ride Series)
What is your writing process?
My writing process involves me writing one book, I get it published and distributed, then I start work on my next one while still attending promotion events to market it. Many authors try to write several books at once. I prefer to keep it simple.